Eating lunch outside the refectory of Vanderbilt Divinity School, back around the turn of the millennium, I remember stumbling across the stone etching of Schola Prophetarum, the School of the Prophets. I am sure all who have passed through the halls of the Divinity School may have reflected on their potential role as a prophet in our community, society, and our world. That is our legacy.

I had the unique opportunity during my time at Vanderbilt to work with a prophet-like figure, Bono, the co-founder of the ONE Campaign and the lead singer of the band U2. As he was traipsing across Middle America in 2002 during the Bush administration, galvanizing faith communities with his organization, DATA, I raised my hand to help. I spent the next six years with a brilliant rag-tag team of activists in Washington, DC. working together to promote awareness and advocacy for extreme poverty and disease, namely for HIV/AIDS in Africa. I served as the national faith outreach director. In 2002, less than 50,000 people in Sub-Saharan Africa had access to anti-retroviral medication (ARVs) that could save their lives from HIV/AIDS. Today, more than 12.9 million people have access to ARVs, thanks to the legislation of PEPFAR and the Global Fund to Fight AIDS, TB, and Malaria. More specifically, thanks to the American taxpayers. We have turned the tide.

Bono took a unique approach then by reaching out and pleading that faith communities take the lead on this issue of HIV/AIDS, in spite of the issue being at the heart of the culture wars of the 1980s. He stood outside the walls of the Church as an Irish rock star, but his language and zeal and authentic Christian beliefs allowed him to serve as prophet-esque leader inspiring faith leaders and people in the pews to love our neighbors, albeit an ocean away. And I had the unique opportunity to strategize, implement, and create language for him and the organization that I hope offered a prophetic voice on behalf of some of the most vulnerable populations around the world.

Today, that opportunity to create new language and a fresh perspective for a prophetic voice in the global health arena has arisen again.

Family planning, like HIV/AIDS has found itself in the throes of cultural battles. It is often misunderstood as including abortion, which even today, 40 percent of Americans believe it should be illegal in all or most cases.[1]But planning families doesn’t have to mean abortion. In fact, it makes abortions less likely. When discussing family planning in the developing world, we discuss with the public that the Helms Amendment of 1973 prohibits the use of US foreign assistance to pay for the performance of abortion as a method of family planning or to motivate or coerce any person to practice abortion. 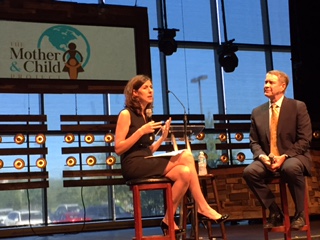 I now serve as executive director of Senator Bill Frist, MD’s Nashville-based global health organization, Hope Through Healing Hands. Recently, we have partnered with the Bill & Melinda Gates Foundation to build the Faith-based Coalition for Healthy Mothers and Children Worldwide to promote awareness and advocacy for maternal, newborn, and child health with a special emphasis on healthy timing and spacing of pregnancies, or family planning in developing nations. 220 million women around the world say they want to avoid their next pregnancy but they don’t have the education, services, or access to contraceptives to do so. Melinda has made this a priority for her and for her Foundation.  As have we.

Senator Frist and I have been traveling across the United States once again, not unlike what we did over a decade ago for HIV/AIDS, to talk about family planning with faith leaders in churches, nonprofits, and academic communities. We also have been talking with religious and cultural leaders including artists, authors, and athletes. And we are building endorsements for the coalition with momentum.

Our goal is to create a new, more meaningful language to talk about the importance of family planning. Right now, to create a “big tent” approach welcoming Catholics and conservatives alike, we use language like “healthy timing and spacing of pregnancies.” These issues are at the nexus of other global health challenges, including combating extreme poverty, keeping children in schools, promoting gender equality, improving maternal and child health, and preventing mother-to-child transmission of HIV/AIDS. We can all agree that healthy timing and spacing of pregnancies saves lives.

If a woman can better time her pregnancy in a developing nation, between the ages of 18-34, her rate of surviving the complications of pregnancy and childbirth rises dramatically. For instance, she is 10-14 times more likely to survive childbirth between the ages of 20-24. And if she can space those children, just three years apart, the child is twice as likely to survive the first year of life.

Senator Frist and I do not stand inside the church as leaders of faith. But we have longstanding relationships and the expertise to challenge many in the faith community to rethink its stance on family planning, particularly for those in the developing world. We may not have the rock star status of Bono, but the education from the School of the Prophets still infuses my own writing as we create strategy and language for a renewed dialogue across the spectrum of faith communities. We hope to proffer a prophetic voice with a clarion call to save the lives of millions.

We invite you to join us. Learn more at HopeThroughHealingHands.org.